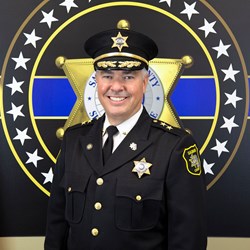 Sheriff Federspiel was elected in 2008 with 72% of the vote and re-elected in 2012, 2016, and 2020. Since taking office, Sheriff Federspiel has made the Saginaw County Sheriff’s Office the most diverse law enforcement agency in Saginaw County. As the Sheriff, a Michigan Constitutional Officer, he is responsible for the following: the operation of a 511-bed jail; a law enforcement division to include emergency first responders which serve a population of 203,000 people living within 810 square miles of the jurisdiction of Saginaw County, Michigan; security for the 70th District Court of Michigan, and numerous other duties.

Sheriff Federspiel began his law enforcement career with the City of Cape Coral in southern Florida for almost 10 years, where he achieved the rank of Master Corporal. During this time, Sheriff Federspiel stayed informed of what was taking place in Saginaw County, mainly with the gangs, drugs, and senseless homicides. Before becoming Sheriff, he was a police officer with the Saginaw Township Police Department for 12 years.

Sheriff Federspiel has always been very involved with the community, and more specifically various committees and organizations. Prior to being elected as the Sheriff of Saginaw County, he was a member of the Board of Directors, Saginaw County 911 Authority (2005-2008), Fraternal Order of Police (FOP) (1987-1996), and Police Officers Association of Michigan (POAM) (1996-2009) where he served as President, Vice-President, and Secretary. In addition, Sheriff Federspiel was appointed, and then elected, to the Saginaw City Council in 2005. He served on numerous committees and worked hard to pass a community-supported millage for the City of Saginaw Police Department. Sheriff Federspiel then tendered his resignation from the Saginaw City Council on January 14, 2008 and made a choice for his community to announce his candidacy for the Saginaw County Sheriff spot.

Beginning his fourth term as Sheriff, he finds the following four skills are necessary to become and remain an effective and successful Sheriff. He feels you need exceptional communication and presentation skills, that you remain highly organized and systems oriented, and deliver quality media relations.

More in this Section